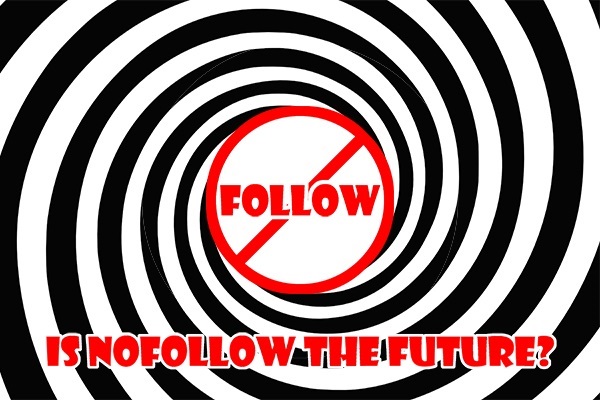 There seems to be a lot of confusion in the SEO world right now surrounding links.

Recent actions from Google have (not surprisingly) caused a bit of panic and hysteria. Out of the frenzy has come this discussion about guest blogs and whether we should apply a nofollow tag to some or all outbound links contained within them.

This isn’t the first time the nofollow tag has come up. Google has also suggested using the nofollow attribute for links in press releases and infographics in the not-too-distant past.

It seems Google is recommending we nofollow a lot of links lately, and I believe it’s getting ridiculous. Can nofollow links really be the future?

This notion of defaulting to nofollow on every link we build or acquire is absurd. Here are some clear reasons why nofollow is not the future.

How We Got Here

Before we get into the issues regarding the use of the nofollow tag, let’s look at how we got to where we are today.

Viable link-building tactics such as press releases, infographics, and guest blogging have been taken and scaled to point where they became spammy. Because of this, Google stepped in, handed out some manual penalties, and advised nofollowing links from these marketing tactics.

Although there is a right way to do these tactics, many people now believe that all links related to these practices should be nofollowed.

Next came the widely publicized (at least within the SEO industry) MyBlogGuest debacle. Google handed down manual penalties to MyBlogGuest and its members, spreading FUD (fear, uncertainty, and doubt) throughout the SEO community.

Shortly after this, Google gave a site-wide penalty to well-known SEO Doc Sheldon’s site, which involved a link in a guest blog. These actions from Google drew a lot of industry attention and quickly escalated the discussion about nofollowing guest blog links.

Out of fear, some sites have implemented a nofollow policy on all guest blog links. Others have tried asking Cutts directly if they should be worried about links in guest blogs:

“.@mattcutts Moz has guest authors on http://t.co/gJTvvU1gi9. We editorially review carefully; do we/the writers need to worry re bio links?

By now it’s clear that Google is targeting links in spammy or low-quality guest blogs and if you have these types of links you should absolutely nofollow them (or better yet just don’t have these links). But moving forward, should we expect to change all links in a marketing campaign to nofollow?

My simple answer: no.

Here are four reasons why.

First off, nofollowing even guest blogging links can’t be the future because widespread adoption isn’t feasible.

We can be a bit jaded and tend to forget that we aren’t the majority of the Internet population.

Many webmasters don’t know the difference between a dofollow link and a nofollow link or that this distinction even exists. Needless to say, these people do not know how to properly apply a nofollow tag to their links. Even people who run big authoritative sites can struggle with technical on-site issues involved in nofollow implementation.

It’s only the cutting edge SEO communities who are discussing nofollow or adding a nofollow tag to all their guest blog links.

Looking just at guest blogging, we can begin to see how ridiculous it is to default to the nofollow tag on links, simply because they were built manually.

It’s actually pretty ironic that it’s the SEO community that is freaking out about nofollow the most.

2. Nofollow Is a Band-Aid Fix

Applying a nofollow tag to all manually built links is a Band-Aid fix – it doesn’t solve the real problem.

The nofollow tag doesn’t address people creating spam/low-quality stuff. Scaring a small portion of webmasters into nofollowing guest blog links won’t even put a dent in the spam that’s out there. Not even just the guest blogging spam.

If Google doesn’t want to count certain links, they should figure that out internally. Bullying people with FUD isn’t the answer. This is causing confusion amongst even those who are SEO savvy (i.e., Rand Fishkin’s tweet).

I fully endorse Google’s war on spam and I certainly agree with Matt Cutts that there is some definite spamming going on within guest blogging. However, I don’t think scaring people into nofollowing links they actually trust is an effective solution.

The nofollow tag wasn’t created to be used on every link within a guest blog.

Nofollow was born in 2005 and meant to be used when linking to a site/page that has content you don’t trust. For example, if you were writing a story about an unsavory link network that Google had recently penalized and you wanted to provide a link to said network – you would nofollow that link.

This is why nofollow was created – to tell Google not to follow that link and not connect your site to theirs.

The way many within the SEO realm are using (or discussing using) the nofollow tag on guest blogging links is not how it was intended to be used. The sites considering doing this are sites thathold high editorial standards and are very judicious about where they link. Due to the scare tactics from Google, sites are nofollowing links that point to sites they trust, simply because those links are located in a guest blog.

This is literally the exact opposite of how Google’s own Webmaster Tools page says to use the nofollow attribute.

Not only is this not how the nofollow tag was meant to be used, but it also goes against Google’s own advice to treat users and crawlers the same. Unlike the ‘link network’ example I used earlier where we would be telling the users we don’t trust that site within the content – by nofollowing editorially placed links in guest blogs we’re telling users that we trust the site, but telling crawlers (Google) we don’t.

4. These Links Are Real Signals of Trust and Authority

Finally, if all guest blogging links were nofollowed it would devalue some of the links that Google should want to count.

Google is always searching for signals of authority and high-level guest blogging can provide those signals.

For example, if an authoritative site is willing to publish a post from a guest author, they should include a citation link in that author’s bio. This link is a vote of confidence for that author’s site that indicates authority to Google. If that same link is nofollowed, Google does not receive the indication that the author is authoritative.

Also, the author needs that link to show who they are and why they are credible. This gives the reader the opportunity to visit the author’s site and make their own assessment on the author’s credibility.

If we begin to commonly tell Google we don’t trust a site (nofollow) that in actuality we do trust (and this becomes the norm) how will Google sort this out? This could potentially cause some serious confusion for Google regarding a singular site.

For example, take a new site by an authority figure that predominantly uses guest blogging in their marketing. Even if this site did everything the right way and wasn’t spamming, Google would not be able to attribute links in their guest blogs as votes of confidence because they would be nofollowed.

There are four main reasons why I believe defaulting to the nofollow tag for all links acquired through marketing activities is not the future:

Google is targeting spam related to guest blogging. Recent penalties handed down by Google in an orchestrated FUD campaign have folks in the SEO industry in a frenzy about nofollowing links in guest blogs and even manually placed links in general. However, for the reasons listed above, I don’t believe we can continue on our current trend of making the nofollow link the future.