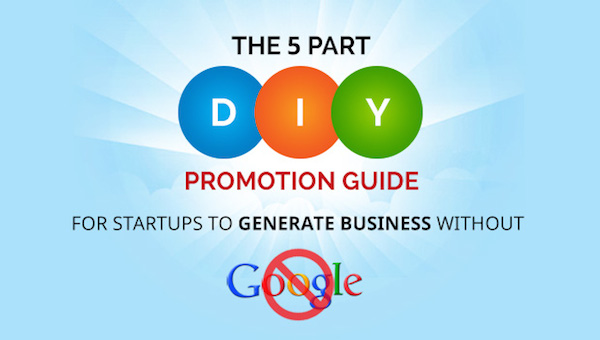 It’s no secret that I’m a huge fan of search engine traffic, and the strategies that you can use to attract and keep it. But here’s something everybody who loves SEO needs to recognize: It’s dangerous, short-sighted, and risky to count on a search engine monopoly to subsidize your business model, not without diversification.

That’s why you should favor an SEO strategy that makes sense for promotion,even if the search engines completely ignored what you did.

But let’s take things a step further by looking at how you can diversify your incoming traffic streams and boost revenue and awareness without the search engines.

Some of these tactics will help your SEO, but that’s not the focus. Today, it’s all about securing business growth without the aid of Google.

Let’s break it down into a five-part process.

It doesn’t take a genius to figure out that people won’t find out about you unless they actually see you. In order for them to see you, you’re going to have to go where they are.

Now, I can already hear the mouse clicks as you race to your browser’s URL bar and type “Twitter” or “Facebook,” but let me stop you right there. Social media can certainly be a great place to gain exposure and drive traffic, but it’s not where the topically oriented conversations are happening.

Facebook is a place for friends and family to share bite-size images that make them laugh or go “aww.” The sooner you understand that, the sooner you’ll be able to master Facebook marketing, and the sooner you’ll realize it’s not the best place to find relevant traffic.

As for Twitter, it’s a great place to find influencers, and we’ll talk more about that later. But Twitter isn’t really a place where in-depth conversations are happening, especially not about specific topics.

So I want to stress this. I’m not necessarily talking about social networks. I’m specifically talking about the places on the Internet where your target audience hangs out. There are a number of answers here, and you need to broaden your scope a bit in order to figure out where these people are.

Regardless of where these discussions are taking place, your role is going to play a similar part:

One more bit of advice: focus your attention on a limited number of platforms. It’s much better to completely win over a single community, even a small one, than it is to have a scattered presence on a large number of platforms. Community strategies tend to work only after people have seen you more than once, and always had a favorable experience when they did. It’s much less common for people to see a single post by you on a forum with a link, click on it, and then make a purchase.

It’s sort of a no-brainer these days that you need great content in order to capture or keep an audience, but all too often this ends up falling by the wayside. A big part of the reason for this is the ambiguity of a phrase like “great content.”

What you really need to do is produce content that solves a problem for people. You need to think of the content itself as a product, and that means defining its unique selling proposition, figuring out its target audience, and working through exactly how it’s going to help the person on the other end. This is the activity that keeps people coming back.

Make sure you’re solving the right problem. This is a big one. While it can be wasteful to perform marketing research every single time you create a blog post, it’s good to have at least some data to work with when you’re deciding what to write about. I’m not just talking about keyword research here. Remember, it’s not about the subject, it’s about the problem.

A few ways to discover the problem:

Once you’ve found your problems, the next step is to solve them in ways that haven’t been done (or at least done well) before. This is all about your unique selling proposition. Think of your blog like a magazine. You need to stand out in order to keep an audience.

This all happens on two levels:

A few other things you can do to make the most of your content strategy:

You need to actually promote your content in order for any of this to matter. Obviously, you should leverage your presence in the communities I mentioned earlier in order to get your content in front of people. Brian Dean has also shared some awesome untapped promotional strategies:

3. Get Mentioned on Top Platforms

It should go without saying that a bit of mainstream press can go a long way.

Journalists are always on the lookout for a new story, and if you can help them accomplish that, you can put yourself in front of a big audience and gain quite a bit of traction.

One of the best ways to accomplish this is through a site called HARO, or Help a Reporter Out. This is a great way to get in touch with professional journalists and let them borrow your expertise in exchange for some publicity.

I also can’t stress enough that signing up for HARO as a journalist can also be a great idea, as long as you meet their requirements. This is great because it makes it easy to find people to interview and it can put you in touch with a lot of experts.

Signing up for HARO as a source, on the other hand, isn’t free. If you’d rather not spend the $20 a month to sign up, I would still highly recommend reaching out to journalists. While the response rate can be low, the payoff is more than worth it.

The real question is how to capture the attention of a journalist to begin with. Here are a few pointers:

4. Become a Contributor on an Industry Leading Platform

In addition to contacting journalists, if possible, becoming a contributor to a popular blog or online magazine is one of the smartest things you can do.

A lot of digital marketers will talk to you about how great guest posting can be, but in this case I’m talking about taking things to the next level. We’re talking about multi-author online magazines, such as Search Engine Watch. When you post frequently to one of the top sites for your audience, you get the kind of much-needed repeat exposure that can make all the difference.

Becoming a regular contributor on a top platform isn’t necessarily as hard as you might think. While you probably won’t be a journalist for The New York Times anytime soon, plenty of high-quality publications are always looking for more content.

If you have at least some history getting published on high-quality sites, there are plenty of multi-author magazines that will be willing to take you seriously, especially if you aren’t asking for any financial compensation.

5. Use the Power of Influencers

This has already come up a few times during this post, and it’s easy to see why. As much as the Internet has given us the power to publish and reach people on our own, there are still influential people, and they are still very important. In fact, they may be more important than ever.

The difference is that the modern “gatekeeper” doesn’t look like the CEO of a massive media conglomerate. The modern gatekeeper is instead an influential tweeter, a blogger with a large audience, or a YouTuber who gets millions of views every time. These people are influential, but they aren’t deciding who is and who isn’t getting published. They’re simply the people who have an audience to send your way.

We’ve already talked about a few of the ways that influencers can help, but let’s go a bit more in depth:

As useful as search engine traffic can be, you don’t need it to launch a successful business online.

When you seek out the communities, influencers, and platforms that your audience is spending time with, you can gradually persuade those people to see what you have to say. After capturing and keeping that interest by solving problems for these people, you can build up an audience and continue to grow.

Don’t rely on the whims of a search engine monopoly to keep your business afloat. Diversify.