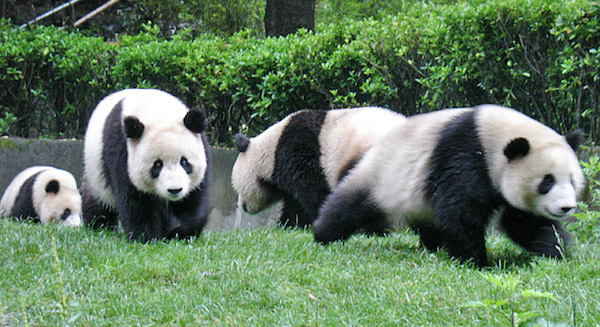 Panda 4.0, which Google and Matt Cutts confirmed began rolling out yesterday, has definitely caused some waves in the search results. However, the fact that Panda 4.0 is also hitting at the same time as a refresh of an algorithm targeting spammy queries like payday loans makes it a little bit more difficult for webmasters to sort through the damage.

With the payday loans refresh impacting extremely spammy queries and Panda targeting low-quality content, some webmasters could potentially get hit with both of these or by just one or the other.

While usually people complain about losing rankings, Alan Bleiweiss from AlanBleiweiss.comshowed via Twitter that Panda can also bring about some serious improvement to a site’s traffic as well. 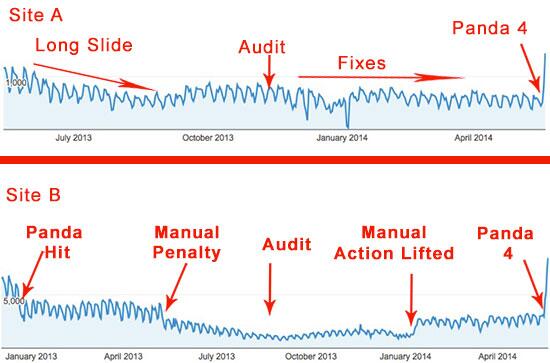 Prior to Cutts confirming via Twitter that Panda 4.0 hit, there had been plenty of speculation about a change with either Panda or Penguin, although many found it hard to pin down exactly what the change was.

“It was interesting to see the chatter amongst SEOs over the last few days,” says Marie Haynes ofHIS Web Marketing. “We all knew that something was going on, but there was significant disagreement on exactly what Google was doing. Most of the black hats were saying that it was related to Penguin because they were noticing huge drops in their sites with the spammiest link profiles.”

This would have been the changes to the payday loans update, where the goal is to target the spammiest search queries Google sees. There was also plenty of debate on forums and Twitter about whether the shake-up we saw was Panda-related or Penguin-related. And with the payday loans update thrown in there for good measure, it was definitely confusing.

“I was really hoping that this wasn’t a Penguin refresh because the majority of the sites that I had done link cleanup on were not seeing any improvement and if Penguin refreshed and none of my clients were seeing ranking increases, then that would not be good,” Haynes says. “I was also puzzled because one site that I monitor that has been adversely affected by several Panda updates saw a vast improvement today. It does not have a bad link profile and would not have been affected by a Penguin update. ”

“When I heard the announcements that Google had released two algorithms over the last couple of days – payday loans and also a big Panda update, everything made sense. And still, so many of us are waiting for that big Penguin refresh. It wouldn’t surprise me if that happens in the next couple of days,” she says.

Google has said previously that they try not to throw multiple updates at once or within a very short period of time, so it is interesting that they pushed out two completely unrelated updates – although updates that could both impact some the same sites – within a couple of days.

Releasing two back-to-back updates makes it a lot harder for webmasters to analyze the changes and what specifically was targeted in these updates, and could affect Google’s ability to evaluate how well (or not) the two updates worked. It also means webmasters might have a challenge knowing what changes need to be made in order to recover search rankings.

However, Haynes speculated that some of the Panda change might have been to reverse some of the damage done to sites that had great content yet were impacted for other on-page reasons.

“I think it’s too early to say what this new iteration of Panda is affecting, but I can tell you that in the case of the site that I saw big improvements on, no cleanup work had been done at all,” Haynes says. “It was always in ‘Panda flux.'”

She says some Panda refreshes would hit it hard and then occasionally the site would show a slight increase with a refresh.

“This is by far the biggest increase, though,” Haynes says. “It really is a good-quality site and I believe that what caused it to be affected by Panda in the first place was a site layout that caused crawlers to get confused. Underneath that confusing layout is a site full of really good content. It may be that Google found ways to see past structural issues and recognize the good content as the structural problems would not affect users, just crawlers. But really, that’s a guess.”

Panda first blazed onto the scene in February 2011, and was believed to be Google’s response to criticism of how well content farms were ranking. Google later announced that they internally called it the big Panda update, after Navneet Panda, the Google engineer who created it.

While there have been many smaller Panda updates and a couple larger ones, each rolled out monthly over a period of 10 days, Google had announced several months ago that Panda would be integrated into the algorithm updates and that the “softer” Panda would be less noticeable. However, that clearly isn’t the case with Panda 4.0, which has had a widespread impact, both positively and negatively.

Dr. Pete Meyers from Moz also studied the changes they saw from the latest Panda update, and noticed that eBay got hit particularly hard.

“Digging into the May 19th data (and before Google confirmed anything), I noticed that a few keywords seemed to show losses for eBay, and the main eBay sub-domain fell completely out of the “Big 10” (our metric of the ten domains with the most “real estate” in the top 10).”

In fact, Meyers notes that eBay’s drop was so significant that it dropped from 1 percent of their queries to 0.28 percent. It won’t be surprising to hear of more sites who have seen a drop due to Panda 4.0 – especially sites that have been notorious for having low quality content.

We will definitely see more come out in the next few days as webmasters and SEO professionals have a chance to evaluate the changes and what might have caused sites (either their own or competitors) to either rise or fall in Google’s search results. And since we’re still awaiting a Google Penguin update (Penguin 2.0 launched a year ago this week), I wouldn’t be surprised if we see one of those updates coming soon, especially in light of Google releasing both the payday loans and Panda 4.0 so close together.